August 13, 2022
Doubt is an uncomfortable condition, but certainty is a ridiculous one.
Menu

Former Federal Reserve Chairman and current U.S. Treasury Secretary Janet Yellen, a Polish Jew, has indicated that under the present trajectory, the Treasury Department would run out of money in October. Congress has been called upon to either raise the debt ceiling or temporarily suspend the debt ceiling mechanism. Either way, though, Yellen’s pronouncement is merely another indicator of the failure of the financial system overall. Yellen penned a Wall Street Journal op-ed in which she proclaimed the following:

“Congress has raised or suspended the country’s debt ceiling about 80 times since 1960. Now it must do so again. If not, sometime in October—it is impossible to predict precisely when—the Treasury Department’s cash balance will fall to an insufficient level, and the federal government will be unable to pay its bills.”

Democrats and Republicans have equally contributed to the expansion of debt in recent decades. Nevertheless, the two parties continue to point fingers at each other in regard to the debate over raising the debt ceiling. Democrats lay blame on Trump-era tax cuts, while Republicans seem to be blocking the effort in protest of the Biden administration’s $3.5 trillion budget plan. 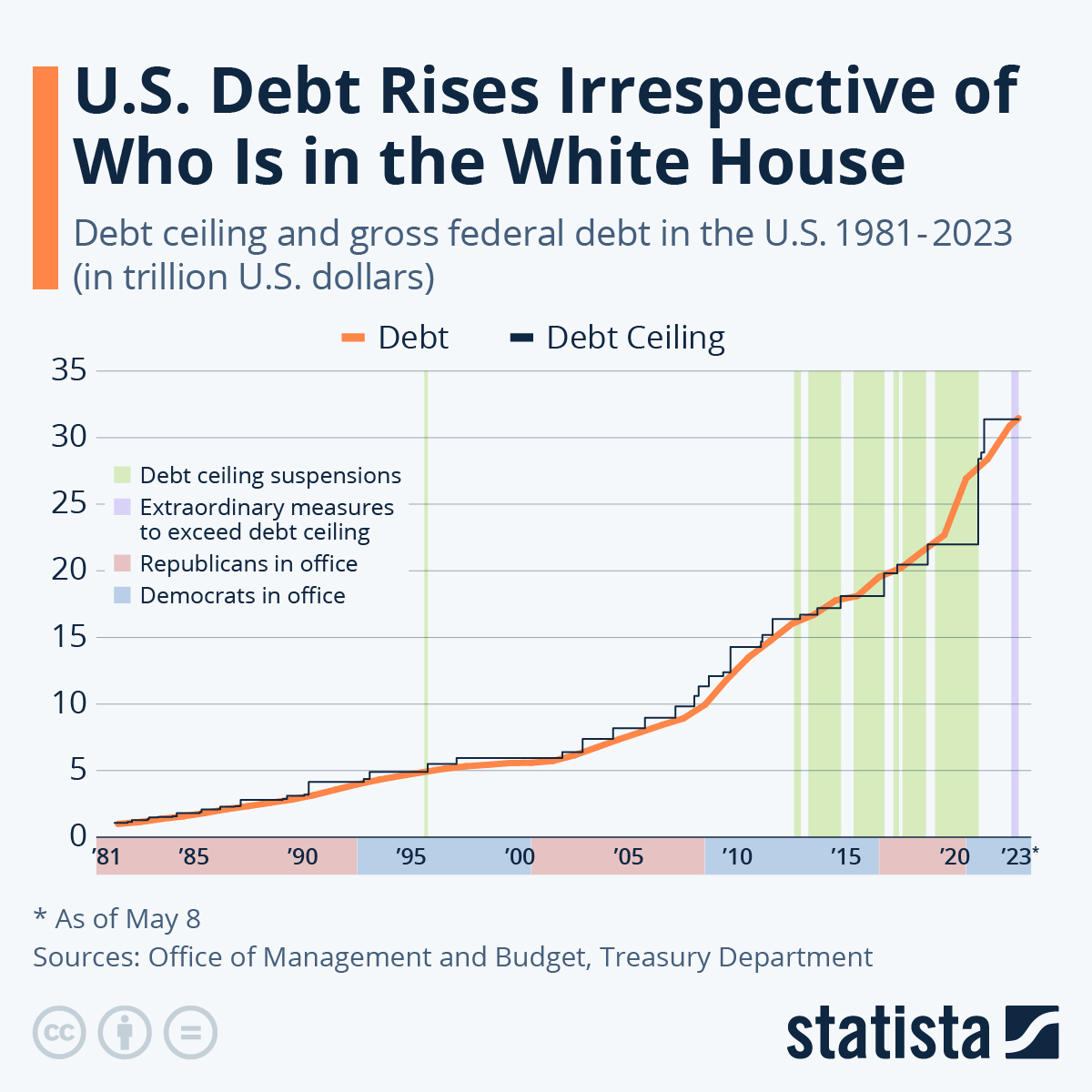 You will find more infographics at Statista

Of course, the entire debate is totally meaningless. When the national debt is approaching $29 trillion dollars, you know the system is entirely broken. U.S. taxpayers own the vast majority of the national debt—78%, to be precise. The rest is intragovernmental holdings.

The debt ceiling, which was established in 1917, is simply a legislative mechanism that limits the total amount of money that a country can borrow. It merely allows the government to finance existing legal obligations, such as Social Security and Medicare benefits; it doesn’t authorize new spending commitments. Most democratic countries do not have a debt ceiling, making the U.S. an outlier.

The U.S. Department of the Treasury describes what would happen in the situation that the debt limit is not increased:

“Failing to increase the debt limit would have catastrophic economic consequences. It would cause the government to default on its legal obligations – an unprecedented event in American history. That would precipitate another financial crisis and threaten the jobs and savings of everyday Americans – putting the United States right back in a deep economic hole, just as the country is recovering from the recent recession.”

Yellen believes the U.S. economy would fall into a recession if the debt ceiling isn’t raised; of course, that is a given. Moreover, a failure to raise the debt ceiling could expose the Federal Reserve and the Treasury as the fraudulent and criminal organizations that they truly are. This is why it’s a foregone conclusion that the debt ceiling will inevitably be raised.

America has always been a nation that pays its bills on time. It is essential that Congress act quickly to address the debt limit to ensure that remains the case. Congress cannot wait until the last minute. https://t.co/VDqpdjmviT

Nevertheless, raising the debt ceiling is a completely nonsensical concept that amounts to nothing more than kicking the can down the road over and over again in order to avoid a financial catastrophe. It’s just a formality that enables this toxic fiat currency-based financial system to continue chugging along. Case in point: Congress has essentially raised the debt limit a total of 78 times since 1960.

Needless to say, the inmates are running the asylum. That begs the following question: How much longer is this toxic and dysfunctional system sustainable? And could this be one of the precursors to a monstrous financial collapse that would usher in a fully digitized, cashless society? It remains to be seen.