August 13, 2022
Doubt is an uncomfortable condition, but certainty is a ridiculous one.
Menu

An apparent rebellion against President Biden’s employer vaccine mandate took place amongst Southwest Airlines employees this weekend, causing over 2,000 flights to be canceled. Numerous employees, including pilots, reportedly took “sick days” in a coordinated manner in advance of a deadline to get the COVID-19 vaccine. Airports around the country were in disarray.

Of course, the company denied any connection to the vaccine mandates, bolstered by the mainstream media—demonstrating the media’s agenda-driven reporting, vile dishonesty, and utter uselessness with regard to reporting the truth. Southwest blamed the issue on “air traffic control issues, bad weather and staffing shortfalls,” according to a CNBC article.

Another example of these mainstream media damage control pieces was an embarrassingly pathetic article in Slate, which reaffirmed Southwest’s claims, blaming the cancellations on “weather and air traffic control snafus.” However, the atrocious piece continues with the following:

“This appears not to be an aviation problem so much as a Southwest problem; other airlines were able to carry on with minimal cancellations after Friday’s disruptions.”

It’s a shame that a trashy disinformation site such as Slate manages to get millions upon millions of readers, but alas, that is the state of the world today, with enough zombified folks out there to support such outlets—but I digress. There is simply no way that Southwest Airlines, out of nowhere, could be the only airline suddenly affected by weather or air traffic control issues—there was certainly another underlying factor at play here, which would clearly appear to be the COVID-19 vaccine mandate.

The rebellion appears to be expanding to other industries and professions, as well. Police unions around the country have been pushing back against the vaccine mandate. The sheriff of Los Angeles County indicated that he would not enforce the vaccine mandate for his staff.

Additionally, the Chicago police union chief instructed officers to ignore the vaccine mandate, which is supposed to take effect this Friday. Just as with the Southwest Airlines pilots’ union, Chicago’s police union is preparing to file a lawsuit against the city.

In another blatant display of gross mainstream media dishonesty, The New York Times—an absolute cesspool of useless filth—indicated yesterday that “Far more law enforcement officers in the U.S. have died from Covid-19 than from any other work-related cause in 2020 and 2021.” I guess they didn’t get the memo regarding the fact that COVID-19 test kits are entirely useless and “cases” of COVID-19 are totally meaningless—but I digress.

These recent developments come on the heels of thousands of employees in the medical industry either quitting or being fired for refusing the COVID-19 vaccine. One such example is Dr. Chris Rake, an anesthesiologist at UCLA, who was placed on unpaid leave due to his refusal to take the vaccine. He recorded himself being escorted out of the UCLA medical plaza.

UCLA anesthesiologist Dr. Chris Rake, a COVID-19 vaccine mandate opponent, was escorted out of the UCLA medical plaza yesterday and placed on unpaid administrative leave for refusing to get vaccinated or request an exemption.

It does seem odd that in the midst of a “deadly” pandemic, thousands of such employees would suddenly be let go—but again, I digress. Nevertheless, as it pertains to Southwest, it still remains to be seen whether other airlines will follow suit. However, this could just be the beginning of a tidal wave of protests against employers that adhere to Biden’s repressive and cruel vaccine mandate.

Interestingly, Texas governor Greg Abbott issued an executive order on Monday banning all COVID-19 vaccine mandates in the state, including for private companies—in defiance of Biden’s order. However, both Southwest and American Airlines (also based in Texas) have defied Abbott’s order and are still requiring their employees to be vaccinated. 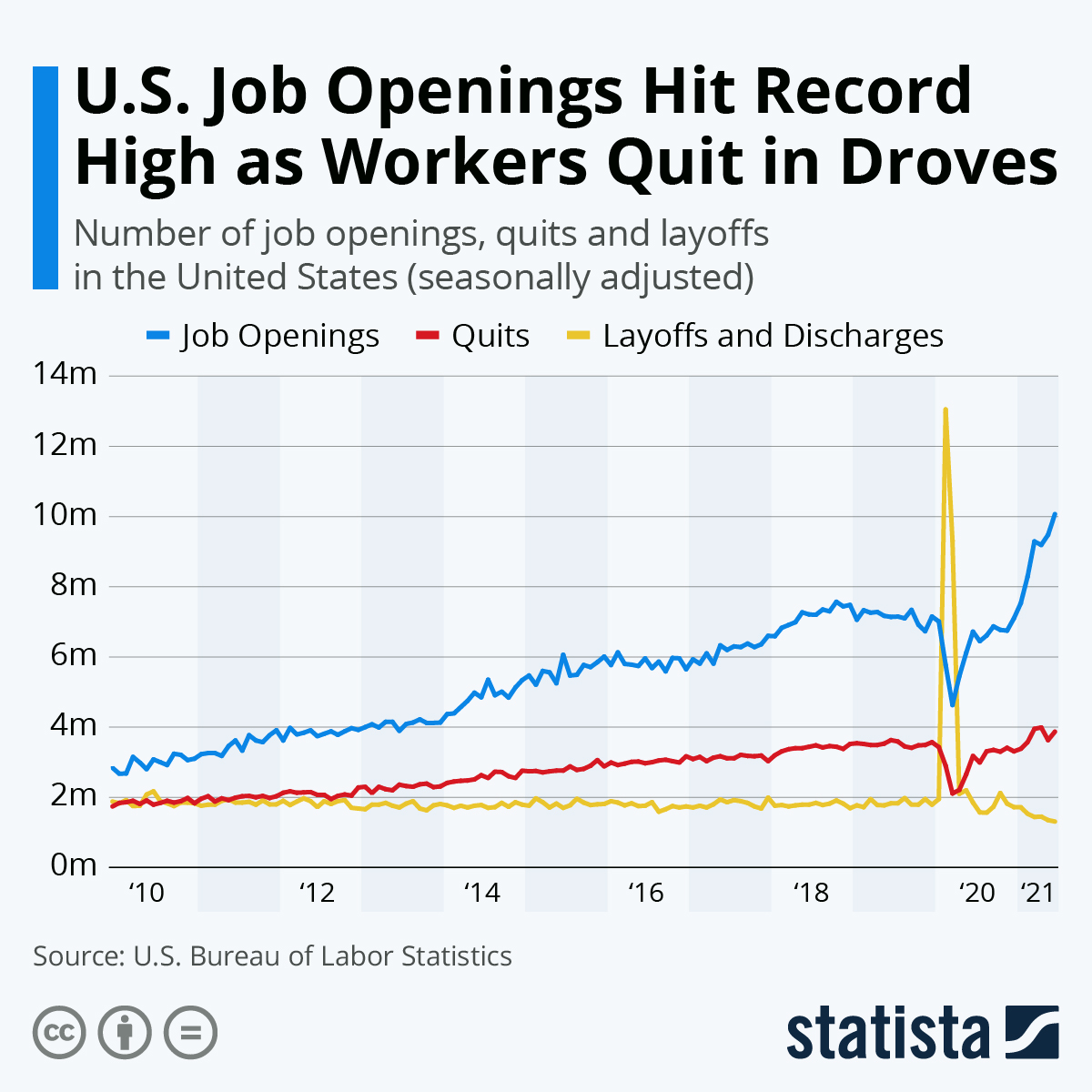 You will find more infographics at Statista

Another key thing to keep in mind is the fact that there has been a “Great Resignation” taking place in recent months, with nearly two-thirds of U.S. workers looking for a new job, as reported by Fortune. In April alone, there were nearly 4 million resignations—roughly 2.8% of the workforce—which was the highest rate since 2000. Statista highlighted this phenomenon in a chart published in August.

That rate has since been topped by the month of August, in which nearly 4.3 million people quit their jobs, or 2.9% percent of the workforce. The pandemic as a whole has certainly contributed to this “Great Resignation,” but Biden’s recent vaccine mandate appears to be kicking it into overdrive as of late.